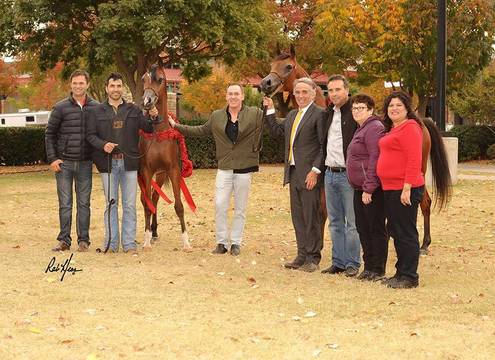 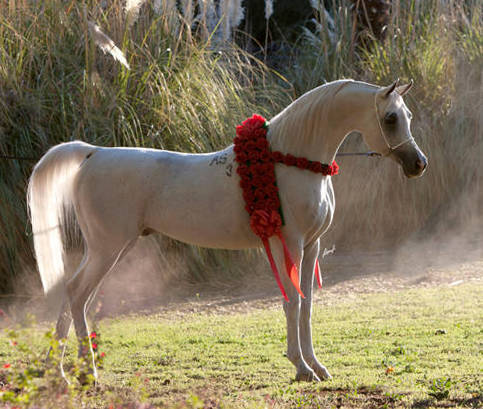 Psynergy Equine takes a three pronged approach to breeding Arabian horses: First, they focus on bloodlines, and breeding superior individuals who contribute hybrid vigor and preserve the best blood the breed has to offer. Second, they focus on preserving Arabian “type” in its greatest sense: both the physical and temperamental components that make the Arabian horse a superior breed. Third, they work tirelessly to spread their passion and expand the exposure and function of the Arabian horse beyond the show ring and breeding barn.

Founding partner, Michael Weinstein has long history of achievement as both an Arabian horse breeder and businessman.

From the very beginning, horses were a passion for the Weinstein family. In 1981, at the height of the Arabian horse market, Mike and his father created Aries Associates to introduce family and friends to the wonder of the Arabian horse. Mike was in charge of all breeding, showing and marketing decisions for the mares purchased, and the mare group Weinstein ultimately chose- in association with Lasma Arabians - included both Edjora (Exelsjor x Edessa) and her two-year-old daughter, Kajora (Kaborr x Edjora).

Kajora would go on to be U.S. National Champion Mare in 1982, and, perhaps more importantly, produce one of the most influential stallions of all time: Gazal Al Shaqab (Anaza El Farid x Kajora) .[1] Famous not only for his son Marwan Al Shaqab (x Little Liza Fame), but also for the indelible mark he has left on Polish breeding through his incomparable daughters such as Janow Podlaski’s Pianissima (x Pianosa), Michalow’s Emandoria (x Emanda), and Bialka’s *Perfirka (x Perforacja).

Kajora was only the beginning of Mike Weinstein’s success. In 1983, Michael formed Fidelis International and bought the Russian Arabian stallion Menes ( Nabeg x Metropolia) from Russia’s famed Tersk Stud. Menes had a profound effect on Arabian breeding throughout the globe. By the early 1990s, Menes had sired Swedish, British, German and Belgian National Champions, as well as World Champion Arabian horses and European Champion horses. [2]

Breeding programs, such as SAX Arabians in Germany, were developed around Menes daughters, such as SAX foundation mare Menascha (Menes x Nascha by Neman), dam of the European Triple Crown winner Essteema (Essteem x Menascha); as well as Menes sons, such as Vympel (Menes x Molva by Aswan), known as the “Black Prince of Tersk,” and Balaton (Menes x Panagia by Aswan), a stallion who would become so important to Arabian breeding programs around the world that he would become known as the "Horse of the Century."[3] 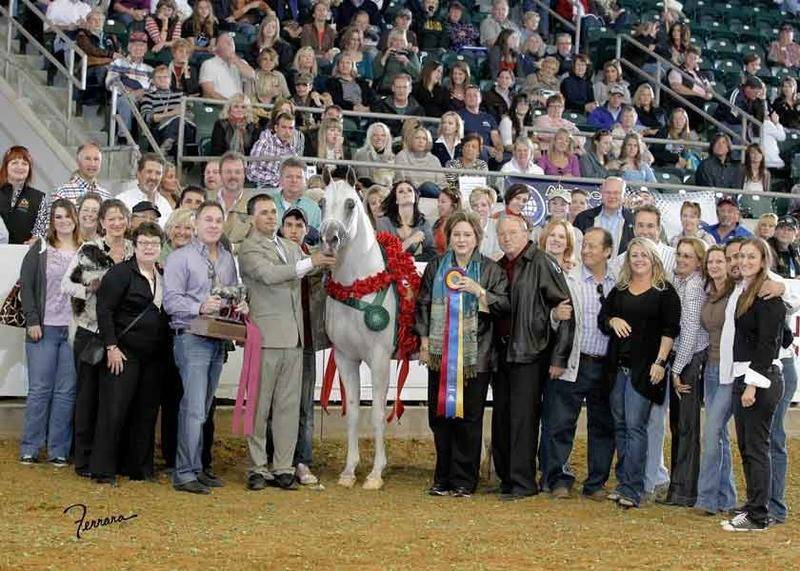 In 2006, Mike Weinstein found the next step in his breeding journey when he attended a party at North Arabians and saw the white Balaton grandson, El Nabila B (Kubinec x 218 Elf Layla Walayla B). Together with such esteemed breeders as Princess Laeticia d’Arenberg and Howie Kale, he quickly joined and illustrious group of internationals breeders and became one of the El Nabila B Partners.

“In El Nabila B, I saw the heir to the Menes dynasty. From a pedigree standpoint, he is one of the best representatives of the – now rare –  Bairactar sire line through Amurath Sahib (Bask’s mother was an Amurath Sahib daughter), which made him appealing not only to me, but to Poland, who bred mares in 2007, 2008, and 2009.  This also allows him to add hybrid vigor when bred to a variety of different mares, especially those with Saklawi I sire lines like Padron, Magnum Psyche, Gazal Al Shaqab, Marwan Al Shaqab, and Al Lahab daughters.”

As an individual, El Nabila B exhibits many of the most important elements of true Arabian type. “Type is not just a dishy face,” state Mike. “Type is the extreme balance; strong topline (a direct attribute of his Bairactar sire line); the high, straight tail carriage; large, liquid, black eyes; and exceptional, floating movement that Nabila consistently passes to his offspring. It is also temperament, and breeding the type of horses who love people as much as they love showing off.”

In Spring 2010, Mike and his current Psynergy partners Arturo Uribe and Jean Edwards, purchased the gorgeous stallion outright, and that October, at the age of fourteen, El Nabila B became the oldest stallion to win United States National Champion Stallion.

“He’s the horse of a lifetime, and forms the cornerstone for the current Psynergy breeding program,” continues Mike. “He’s won National Championships here and in Brazil, and, more importantly, his offspring continue to win around the globe, AND produce in the breeding barn. Examples of this in our program are Diya Forx (x Pocahontas K) who was U.S. National Reserve Champion 6-7 Year Old Mare in 2012, and produced Diyannaa by ZT Marwteyn who was Arabian Breeders World Cup Champion Filly Section A in April of 2016.

Likewise, Titan AS (El Nabila B x Om El Beladeena), won his first championship at the Arabian National Breeder Finals as a weanling, and was Supreme GOLD Champion Junior Stallion at the 2015 Arabian Breeders World Cup with an astounding twelve 20s – way more than any other stallion,” says Mike with a grin.

Jean agrees. “I met Mike when he brought Menes to the U.S., so we have been friends for over thirty years through the Arabian horse,” she remembers. “I got out of horses in the mid-nineties, but Mike and I continued to be friends. I got back into horses when we opened our main business Psynergy Programs, Inc., which specializes in helping individuals experiencing mental distress celebrate hope, promote personal growth, build social networks, and help individuals realize their full potential.”[4] 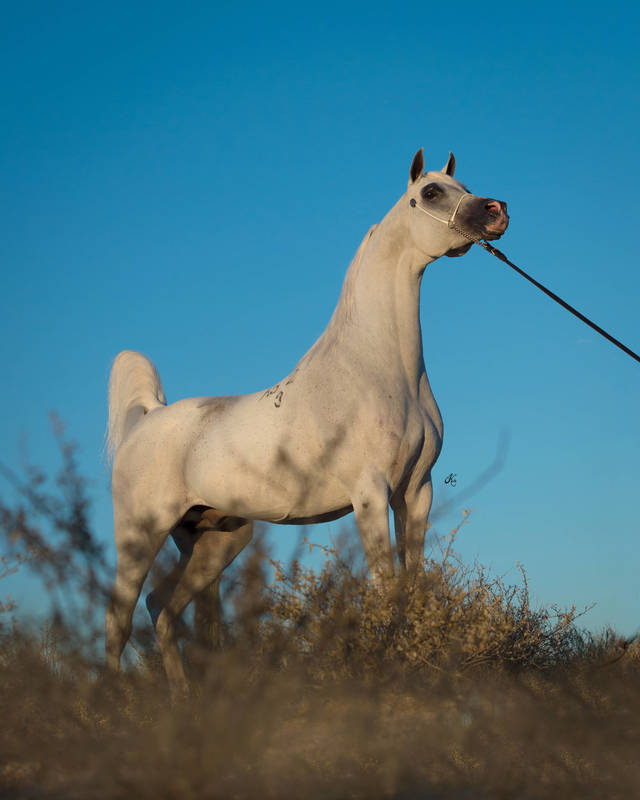 “When Mike took me to see El Nabila B, I fell in love. Because we spent so much time together over the years doing horse related activities, buying into the El Nabila B Partnership and having horses together was just a natural progression - it's just a part of the whole essence of what we're all about,” she continues. “As for Psynergy Programs, Inc., I suggested we create an Equine Therapy Program as a way to help our mentally ill and distressed clients reintegrate into society. You often see horses used for people who have physical disabilities but you very rarely see it used on those who are mentally ill or distressed. I did a lot of research and we decided to give it a shot.

“We all went and got certified. After only a few sessions, we saw major breakthroughs with our clients. It’s an opportunity to pass on the passion of the Arabian horse to these individuals who were deprived of so much joy because of their disability and illness. Even if it's nothing more than petting a horse, they love it and think it's the greatest thing.”

“It’s also a beautiful opportunity for learning,” adds Arturo. “I did not get involved with the Arabian horse until after I met Jean and Mike, but they are incredible animals for therapy. Because of their mental illness, many of our clients have lost all their social skills. The horse is a great instrument to help them develop these skills because of their gentle personality. Even something as simple as hygiene must be retaught because some of our clients have let their self-care go. So taking them to the farm and having them groom the horse so he is not dirty teaches them basic life skills. We are seeing excellent results.”

As for the connection between the three partners, Jean believes spending so much time together gives them an opportunity to socialize and interact on a deeper level than one would normally get in a typical business setting.

“Even when we're doing recreational things, we're still doing business, just in a different way.  We're able to talk and kick ideas around without any pressure or interruptions. Arabian horse shows and trips give us access to one another that we just don’t have at the office.  We are able to engage in the kind of explorative conversations you don’t get in formal meetings like:

A five-hour drive to a horse farm gives us a lot of time to talk about a lot of things. It doesn't always have to be about the horses. It brings us closer together.” 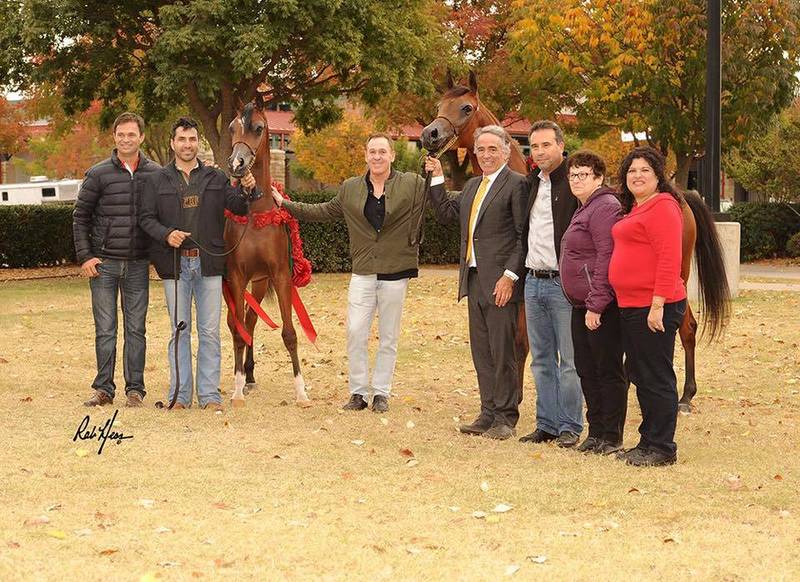 Arturo agrees and adds, “Not all of our horses are going to be champions or sell for six figures, but we're still going to have a purpose for those horses. I think that’s the main difference that sets us apart from other farms: it’s not just our champions and star horses that can do wonderful things. All our horses who are gentle and kind with great temperaments get to help people, and that’s what I like most about the Arabian horses we have at Psynergy Equine.”

The combination of Mike’s expert eye, extensive knowledge of pedigrees and the Arabian horse industry, coupled with Jean and Arturo’s creativity and passion, provides an unparalleled foundation for Psynergy Equine’s success.

“There’s an old Bedouin proverb,” says longtime El Nabila B supporter, Howie Kale. “A man’s reputation is in his stallions, but his wealth is in his mares. With El Nabila B, you are lucky enough to have both.”

And with Psynergy Equine, you may be able to have it all...