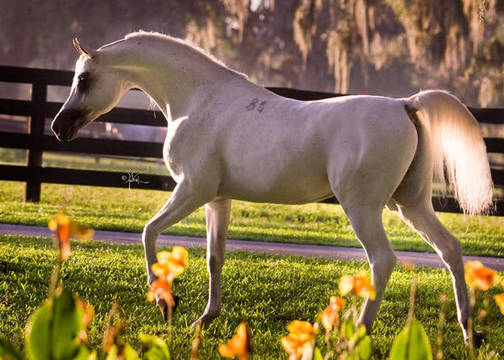 *EL NABILA B is a masterpiece of breeding from Hungary’s Babolna Stud, known for its superb straight Egyptian horses who are noted for their great refinement, overall elegance and extravagant movement. With a stroke of genius, Tamas Rombauer, the Director of Babolna, decided to outcross some of the straight Egyptian Babolna mares with the supreme Russian stallion KUBINEC, although Egyptian outcrosses are usually done through Egyptian stallions. This nick resulted in 1997 Wels Austria Junior Champion Colt MALIK B, and *EL NABILA B, a champion on three continents.

*EL NABILA B has proven his quality in the show ring in Europe, South America and North America. His European titles include two regional championships in Germany in 2000 as well as second in his age class at the Nations Cup and European Championships.  In 2001, he was named the Kreuth International Reserve Champion Stallion and won a gold medal at the German Stallion Licensing Show. He was then exported to Brazil, where he was named the 2004 Brazilian National Champion Stallion.  After coming to the USA in 2006 as an aged stallion, *EL NABILA B has been named 2006 Region 1 Champion Stallion, 2007 Scottsdale Top Ten in his age group, and won his Arabian Breeders Cup age class in 2009 at age 13.

*EL NABILA B has been as impressive a sire as he is a show horse, with winners on multiple continents.  He has sired winners in all the countries in which he has stood at stud.  His German born daughter CARMEN GAZIYAH won the Junior Championship at the Strohen Show in 2004. His Brazilian born daughter LLAYA has been a Middle East and Dubai International Top Five Filly with multiple class wins or second places at significant shows in the Middle East.  Other outstanding *EL NABILA B get born in Brazil include Brazilian National Champion Junior Junior Colt TM ELBILA, Uruguay National Champion Young  Stallion FYNT SERONDELLA, Brazilian National Champion Junior Filly *SASHAA LHT (who won her class at Scottsdale after importation to the USA), Brazilian National Champion Western Pleasure Junior Horse *HSE NOELANI (also a western pleasure junior horse champion in  America), and FARENHEIT GAT, who has multiple halter wins in Brazil and a second place in his class at the Egyptian International Show. *EL NABILA B’s American offspring were first eligible to show in 2008, and include the regional halter winner ARIA DELPHINE and multi-regional halter winner NABILAS FANTASY.

KUBINEC’s sire, BALATON, is a European Champion and Dutch National Champion Stallion. He was named “the Horse of the Century” by Tersk State Stud Director Alexander Ponomarev, and he lived up to the promise of that designation with his many champion get. He is also the sire of the extraordinary racehorse SAMBIST, who won all 5 of Russia’s classic races and went on to win 13 major races in Europe and the Middle East. He retired to stud in England, where he was named the UK’s Racehorse Sire of the Year five times. KUBINEC’s dam KOSMETIKA also produced his full sister, Qatar International Champion Mare KABARDINKA. 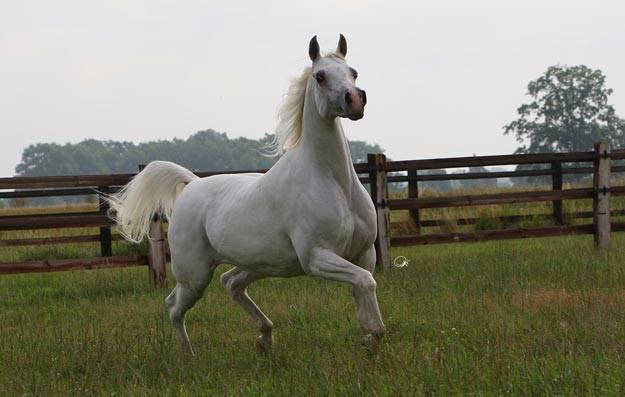