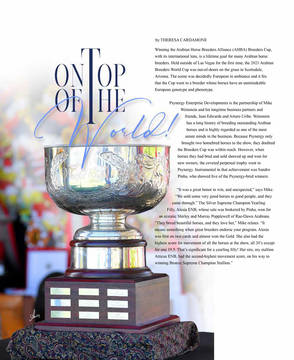 On Top of the World

Winning the Arabian Horse Breeders Alliance (AHBA) Breeders Cup, with its international lens, is a lifetime goal for many Arabian horse breeders. Held outside of Las Vegas for the first time, the 2021 Arabian Breeders World Cup was out-of-doors on the grass in Scottsdale, Arizona. The scene was decidedly European in ambiance and it fits that the Cup went to a breeder whose horses have an unmistakable European genotype and phenotype.

Psynergy Enterprise Developments is the partnership of Mike Weinstein and his longtime business partners and friends, Jean Edwards and Arturo Uribe. Weinstein has a long history of breeding outstanding Arabian horses and is highly regarded as one of the most astute minds in the business. Because Psynergy only brought two homebred horses to the show, they doubted the Breeders Cup was within reach. However, when horses they had bred and sold showed up and won for new owners, the coveted perpetual trophy went to Psynergy. Instrumental in that achievement was Sandro Pinha, who showed five of the Psynergy-bred winners